Welcome to Chapel on the Hill Viewpoint Information Page

Thank you for using the QR Code on the new display at the Chapel on the Hill.

Please select a landmark to find out more about its history, or scroll down the page 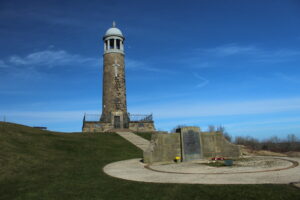 The ‘Crich Stand’ Memorial Tower was completed in 1923 to commemorate the 11,409 soldiers of the Sherwood Foresters (Nottinghamshire & Derbyshire) Regiment who gave their lives in World War I: 1914 to 1918. In 1952 it was further dedicated to the memory of the 1,520 men of the regiment who died in World War II: 1939 to 1945. In 1991 the memorial was further dedicated to the Sherwood Foresters killed in service from 1945 to 1970 and also of the soldiers from the present regiment who have given their lives in the service of this country. 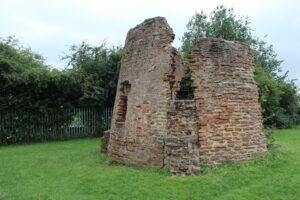 On this site stand the ruins of two mills. In the 1850s the site boasted three mills: two windmills and one steam mill. In the early 1800’s the first windmill (which later became known as the East mill) was brought from Hucknall and re-erected in Kimberley on a site known as ‘The Lawn’.  Thirty years or so later a second mill (this became the West mill) was brought from The Forest, Nottingham. During 1844 a steam mill was erected nearby-this was last used in 1879 and has since completely disappeared. In the 1860’s, the East mill was destroyed by fire; these are largely the remains which exist today. The West mill was destroyed during a gale in 1883; only 4 stone stumps remain today. At present the site is a small open space that houses the remains of the old mills, hence the area is sometimes referred to locally as the windmill site. Today most of the site is a play area with a number of pieces of play equipment and a junior football goal. 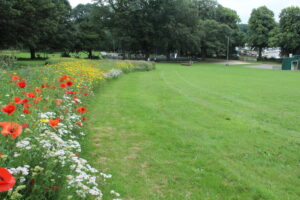 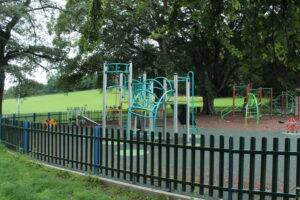 Hall om Wong Open Space is a Council owned site used for a range of sports, play and quiet activities, located close to the urban fringe of Kimberley. The name “Hall om Wong” is derived from the old English, and can be summarised as “Mr Hall’s home piece of land.” Local children refer to the park as “Door One.” 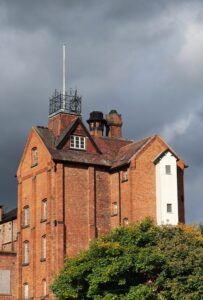 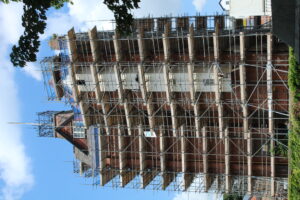 The Kimberley Brewery was the oldest independent brewery in the English county of Nottinghamshire. The brewery has a heritage dating from 1832 when Samuel Robinson established a brewery making good use of the local spring water. As the expanding industrial base of Kimberley attracted more workers the demand for ale increased. In 1847 Stephen Hanson established his brewery on a site opposite Robinson’s and in 1857 brothers William and Thomas Hardy bought out Robinson’s and expanded their operations. In 1930 the two breweries merged and combined their operations. The tradition of large scale commercial brewing continued in Kimberley for over 174 years until the last brew of Kimberley Ale in December 2006 when new owners, Greene King, closed down all operations at Kimberley and put the site up for sale. Since then the site has been developed for new housing. 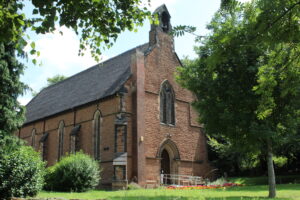 As Kimberley expanded during the mid-19th Century the Church of England recognised the need to provide a local place of worship. Holy Trinity Church was built in 1847 on Church Hill which was formerly known as Kettle Bank. The church was designed by Robert Barber in the “Early English Style” using stone from local Kimberley quarries with the buttress, quoins, window and door dressing being stone from Coxbench. In 1957 a church hall was added within the grounds of the church and was used by various uniformed organisations, theatre groups, for celebrations, sport training groups and displays. In 2019 the church hall was demolished and replaced by two modern detached houses and the church interior was modernised to cope with the demands of modern church life and the building still serves as the Kimberley Parish Church. 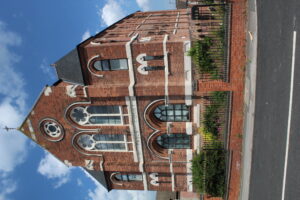 Alderman John Manning is named as laying the Central Foundation Stone of this building but in fact Alderman Manning, the then Lord Mayor of Nottingham, was unable to attend and therefore a colleague and former Lord Mayor of Nottingham, Alderman Leonard Lindley, performed the ceremony on his behalf.  The chapel opened in 1884 having been built at a cost of £2,000 with bricks made by local brick maker William Buxton and donated by Thomas Shaw a bricklayer and ironmonger from Kimberley. The building has now been refurbished and converted into residential properties. 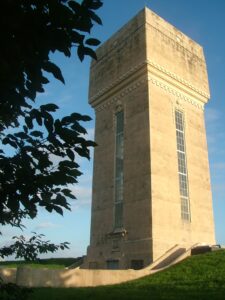 The Kimberley Water Tower is an unusual and iconic building which dominates the skyline around Kimberley and is visible from many miles around the area. The tower and the adjoining underground reservoir were constructed to supply water to Nottingham and replace a failing reservoir at nearby Watnall. The tower and reservoir, which are no longer operational, were opened by the Mayor of Nottingham on 11th January 1950. 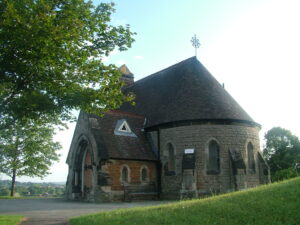 Built in 1883 in the “Free Gothic Style,” this chapel was designed by architect Richard Charles Sutton who also designed the adjoining lodge and cemetery layout. The chapel, the lodge and the cemetery were built by local builders Shaw and Brassington, the total cost of the chapel and the lodge being £1,480.

The chapel building has in recent years been renovated by Kimberley Town Council and is now used for Wedding Ceremonies, Funerals and other significant events. The Chapel is a Grade 2 Listed Building.

Find out more about the Chapel on the Hill here 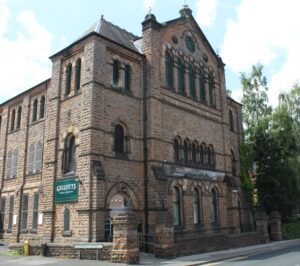 The origins of this church date back to 1808 when the Wesleyans first established a church, known as Quarry Chapel, in an old barn in what is now Chapel Place. Where the church now stands, the area was a favourite rendezvous of the rough element of Kimberley who would frequently pass the Sabbath Day cock fighting and bull baiting. The present chapel building, designed by R C Sutton in the “Italianate Style,” was built at a cost of £2,650 and had a seating capacity of 700. It was opened in 1890 and closed in 1979 due to dwindling congregations. It now houses a family-run funeral directors business. 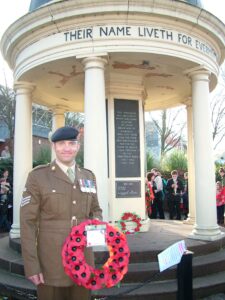 Click here to find out more about the origin and history of Kimberley’s unique War Memorial. 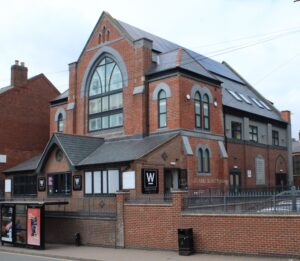 The original Primitive Methodist Chapel was located in what is now Station Road. With the coming of the Great Northern Railway, the site was sold and the Primitives relocated to Main Street. The present chapel was built in 1876 at a cost of £3,055; this amount included the cost of the land. The chapel closed for religious purposes in 1962. 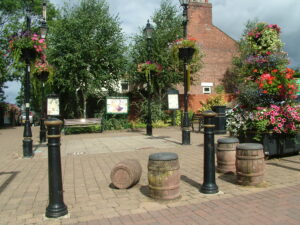 This is an open area near the centre of Kimberley and comprises car parking spaces and a paved pedestrian area. On the floor of the paved area are mosaic tile pictures depicting the heritage of Kimberley Town. Formerly the site of Newdigate House, this area is used for town events such as markets and Christmas celebrations. 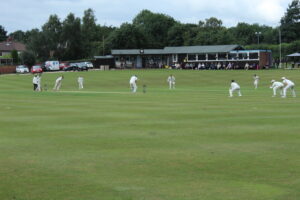 Kimberley Institute Cricket Club was established in 1878 by members of the Kimberley Literary Institute. As an accredited Clubmark Cricket Club it has a proud history as being one of the leading clubs in Nottinghamshire. The club has been three times Nottinghamshire Premier League champions, in 2000, 2015 and 2019. 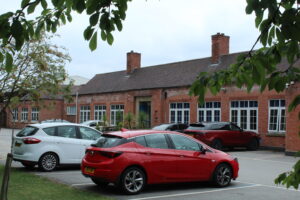 Opened in 1946 as the Kimberley County Secondary School it became a Comprehensive School in the 1970s and more recently, in 2012, it was granted Academy status. The school is a non-selective mixed gender establishment catering for nearly 1400 pupils aged 11 to 18 years. 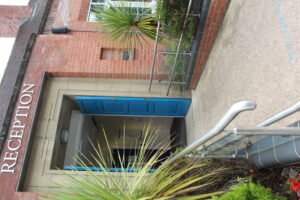 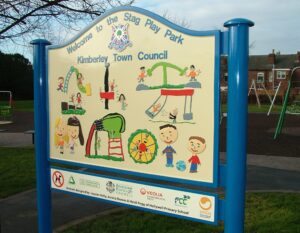 This site was formerly known as The Welfare Ground and now has a number of recreational facilities for the people of Kimberley. The ground has a children’s play area which in 2015 was modernised at a cost of £180,000 and includes equipment which was suggested and chosen by school children from 3 local primary schools and the local Academy. 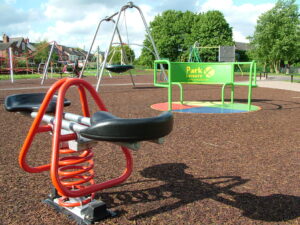 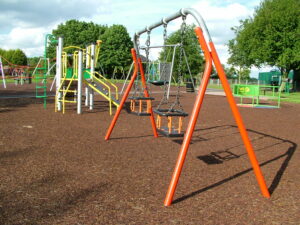 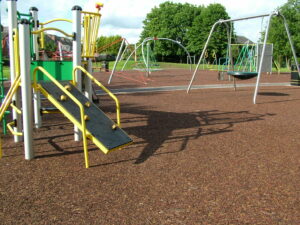 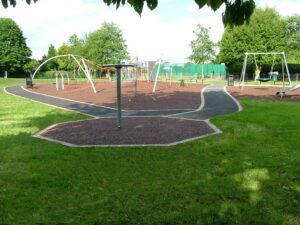 The Recreation Ground also houses the KimberleyTown Council Bowling Green and Clubhouse. The Kimberley Bowls Club, which as a successful concern was established in 1925, operates on this site and has teams playing in a number of Nottinghamshire leagues and cup competitions. 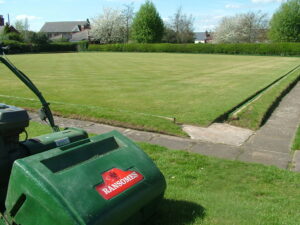 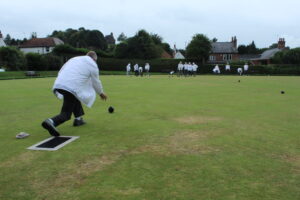 Adjacent to the Bowling Green Clubhouse is the Kimberley Town Council Stag Football Ground the facilities of which meet the requirements for Inter-County Football Club matches. Since 2012 this has been the home ground of Kimberley Miners Welfare FC which was established in 1926, a year after the establishment of the Miners Welfare facility in the town. The first team play in the United Counties League Premier Division North. The club also has several other teams which cater for younger age groups. 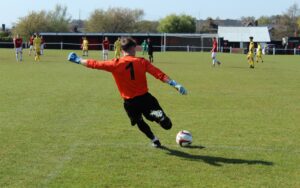 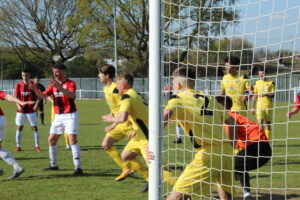 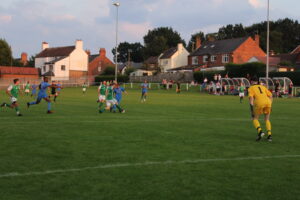 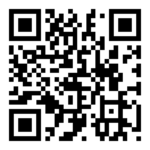